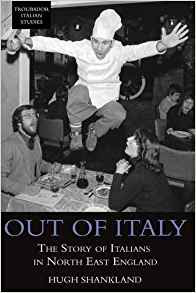 I`ve been meaning to advertise these talks in advance. Tomorrow we have Hugh Shankland giving the following talk:Out of Italy-The Italians in the North East.. Hugh`s book is available on Amazon and I feel certain copies will be available at the talk.There is a synopsis of the book:


Out of Italy concerns the Italian contribution to life in North-East England since Roman times, with particular attention to the last 250 years. Italian-Swiss stuccoists decorated many of the region's finest historic buildings; a colony of skilled craftsmen from Como specialised in manufacturing optical instruments in Victorian Newcastle; and there have lived among us gifted Italian architects, artists, glass-blowers, mosaic workers, and even, briefly, Giuseppe Garibaldi. In the nineteenth century, numerous Italians from a peasant background found their way here to try their luck as street traders and organ-grinders, chestnut sellers and ice cream makers, and many went on to found their families' fortunes. But with the Second World War, when anti-Italian feeling ran high, the community's resilience was tested to the utmost: even elderly long-settled Italians were interned as 'enemy aliens', while other family members served in the British forces, one even winning the VC. From 1942, thousands of Italian prisoners-of-war filled labour camps in the North-East, and a few eventually settled. Mass emigration from Italy resumed after the war, bringing hundreds of men and women to work among us. Their presence and their skills, like those of their many forerunners, have coloured the life of our region in numerous ways. Over 300 evocative illustrations accompany a lively narrative which details the lives of many individuals and families within the broader context of their times. This is the first book to study Italian immigration in a region of England in such detail and over such a long period of time

The talk will be held in the meeting room at St Andrew`s church, Worswick St, Newcastle starting at 2.15pm. All welcome. Non-members of the society are asked for a donation of £1.
Posted by Fr Michael Brown at 16:49