I feel a great attachment to my other parish, St Wilfrid`s, where I lived for ten years from 1995-2005. The future of the parish is looking very unsure. Finances are bad: there was only £8 in the parish bank account before Christmas. The congregation has dwindled to about 35 at a Saturday vigil Mass. In 1979 there were over 400 coming to Mass. We have had two meetings to talk about viability. The parishioners were told about five years ago that things were bad. Some now just want the agony to be over, others want to fight. So we are looking into the options. The mighty basilica of St Patrick`s, Felling is only half a mile away with plenty of room. Please remember the beleagured parishioners of St Wilfrid`s in these difficult days. There is a Facebook group for St Wilfrid`s here. 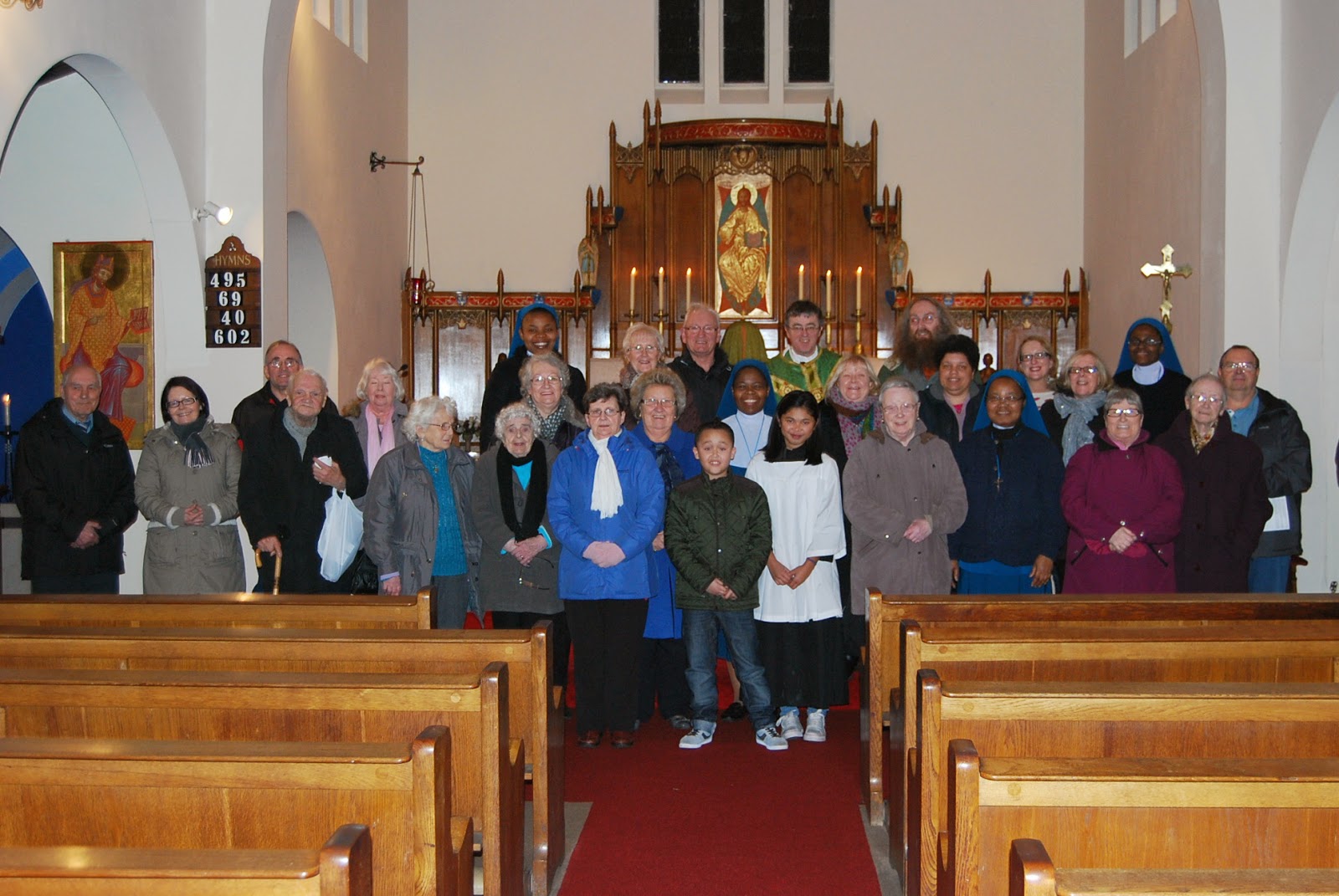 Tonight on BBC 2: ‘Kim Philby – His Most Intimate Betrayal

One of the names prominently associated with seeking to uphold the traditional Mass in the early days was Dr Erich de Saventhem. He was the first president of Una Voce International. He may only be a name to many Latin Mass enthusiasts but he lived a remarkable life. He was notable as a prominent anti-Nazi activist, refusing to join the Hitler Youth.  In 1943 he defected to the British in Istanbul thanks to the help of Nicholas Elliott. I mention all this because there is a programme on BBC 2 tonight and tomorrow about Philby and Elliott which will mention something of the life of Dr de Saventhem. I am indebted to Leo Darroch for tipping me off and he has provided information on de Saventhem for the programme.

Born in 1919 to a patrician Lübeck family, Erich Vermehren was the youngest of three children. When the Nazis came to power all the family were considered politically unreliable and Erich's repeated refusal to join the Hitler Youth organisation marked him as unfit to ”represent German youth” at Oxford, having won a coveted Rhodes scholarship. His passport was revoked, thus making it impossible for him to travel to England.

Vermehren converted to Catholicism shortly after his sister Isa (who had been expelled from her school in 1933 for refusing to salute the Nazi flag). He subsequently married Countess Elisabeth Plettenberg, a member of one of Germany’s traditional Catholic families, which had clandestinely distributed the banned anti-Nazi encyclical Mit Brennender Sorge of Pope Pius XI in 1937. Elisabeth's parents were imprisoned by the Gestapo and she confronted them successfully and obtained their release after three weeks. She herself was variously accused of subversive activities and cross-examined on many occasions by the Gestapo.

As the Vermehrens became increasingly involved in the various German resistance circles it became clear that their lives were at risk in Germany. Erich, who had been excluded from military service on account of a childhood injury, managed to get assigned to the Istanbul branch of Admiral Canaris' Abwehr counter-espionage organisation, which had become a refuge for many anti-Nazi Germans.

Canaris at that time, late in 1943, was making peace overtures to the Americans in Turkey, where Franz von Papen, a cousin of Elisabeth Vermehren, was German ambassador and had been asked to meet the American Archbishop (and future Cardinal) Francis Spellman. The cousinhood of good German families then, as now, dominant in the Foreign Service, ensured Erich's transition from civilian life to the cloak-and-dagger world of the Abwehr.

When posted to the Abwehr office in Istanbul, Vermehren was prevented by the Gestapo from bringing his wife, and she remained “hostage” in Germany. Then, returning to Berlin on leave, Erich agreed with his wife that they defect together to the British and that, to do so, she should accompany him back to Istanbul. For this purpose, Elisabeth managed to procure an official assignment from the Foreign Service with regard to Archbishop Spellman's visit to Turkey. On the train from Berlin to the Turkish capital their plan received a temporary setback when Gestapo agents detained Frau Vermehren at the Bulgarian frontier crossing, leaving Erich to continue alone to Istanbul. Luckily, the Sofia embassy Abwehr and the ambassador, who was a close family friend, managed to spirit Elisabeth away under the Gestapo’s nose in the diplomatic courier plane that touched down to pick up the diplomatic bag at Sofia en route from Berlin to Istanbul

In Istanbul, meanwhile, Vermehren had made contact in early January 1944 with Nicholas Elliott, the SIS's counter-espionage man in the British embassy. Vermehren had gone to an address in the Pera district for tea; a secret sliding door revealed the bespectacled Elliott, who cheerfully extended his hand saying “Erich Vermehren? Why, I believe you were coming up to Oxford.” Though the Vermehrens took no documents or ciphers with them, British propaganda understandably broke the undertaking to keep the defection secret, knowing that it would set the vipers' nest of Hitler's competing intelligence agencies at each other's throats just weeks before D-Day. On hearing news of the defection, Hitler was incensed and summoned Canaris for a final interview, accusing him of allowing the Abwehr to “fall to bits”. Canaris quietly replied that it was “not surprising”, given that Germany was losing the war. Hitler sacked him on the spot and the Abwehr was put under Heinrich Himmler's jurisdiction, causing hundreds of its officers to resign and take up positions elsewhere, even on the Eastern front, rather than serve the SS. The disintegration of the Abwehr took place just as the plans for D-Day were being finalised, an unexpected but useful coup for the Allies.

Although the departure, in February 1944, had initially been set up to look like a kidnapping by the British secret service in the hope of protecting the families back in Germany, a few days later numerous members of their families were arrested. Vermehren's parents, elder brother Michael and sister Isa, and also Elisabeth's youngest sister Gisela were interned in concentration camps in so-called ”Sippenhaft” (collective family punishment) until the end of the war. Remarkably, all survived. Erich and Elisabeth were smuggled back to England via Izmir, Aleppo, Cairo, Gibraltar and Lisbon. One can only call it divine providence that all the members of both families survived their 15 month concentration camp internments unscathed.

Soon left to their own devices, the couple found it difficult to find jobs as ex-enemy aliens, but finally settled as assistant teachers at Worth Priory, a Benedictine preparatory school. They then lived for a while near Brompton Oratory, but it was five years before Eric found a decent job with a firm of Lloyds brokers. It was during their stay in England that they changed their name to Vermehren de Saventhem for genealogical reasons. To most people thereafter, they were known as Eric and Elisabeth de Saventhem.

Eric made a highly-respected reputation in the field of insurance broking for major civil engineering projects, managing the firm's Swiss subsidiary in Zurich for ten years and then being appointed Director for Europe in 1964. They moved to Paris and then on to Switzerland where they settled on the shores of Lake Geneva, both all the while continuing to be active in traditionalist circles of the Catholic Church after Vatican II. It was only in 2000, when Elisabeth's health was failing, that the de Saventhems decided to move back to Germany to be near other members of their families.

After Vatican II, Eric became a leading voice in the young Una Voce movement and was indeed one of the founding members of the International Federation. It was in 1982 that Eric abandoned his very successful career in insurance to dedicate himself exclusively to the traditionalist cause. He was Una Voce's first president and with such a remarkable life experience behind him, coupled with a brilliant intellect and a mastery of languages he fought the cause for the traditional liturgy with unflagging energy and conviction, always ably supported by Elisabeth.

Like Michael Davies, who succeeded him in the Presidency, Eric de Saventhem was a convert to the Catholic faith. The Una Voce movement could have had no better champions than these two men whose deep conviction, personal courage, and devotion to the traditional liturgy of the Church became even stronger as the modern liturgy disintegrated. Sadly, Eric and Michael have gone to their heavenly reward, but it is imperative that we build on what they left us and carry on fighting for the full restoration of Tradition.

Taken from ‘The Independent’ obituary of 3 May 2005 by Richard Bassett with additional information provided by family members and friends.