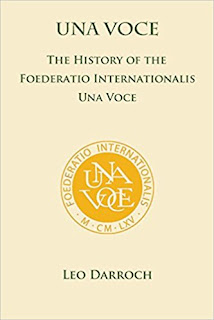 We are fortunate at St Joseph`s in having Leo Darroch as a regular worshipper. As mentioned earlier this year, Leo has long been involved in the struggle to free the traditional Mass and served as president of Una Voce International, the committee which co-ordinates the work of the various national organisations seeking to promote the Extraordinary Form, from 2007-20013. Leo gave us the benefit of some of his long experience in these matters with his talk in July to celebrate the tenth anniversary of Summorum Pontificum. As impressive as that talk was his latest work shows we were only skimming the surface of his knowledge about these matters.

Leo has recently seen his book published by Gracewing press. The title is `Una Voce: The history of the Foederatio Internationalis Una Voce 1964-2003`. As such it is a fascinating source of material. I suspect it might be more of a reference book than a one to read from cover to cover but I`m going to start at the beginning. The story of the campaign by various lay committees to push for the preservation of the traditional Mass in the face of incomprehension and hostility and to do so with the success that was crowned with Summorum Pontificum is a remarkable one. With Leo`s book we now have a readily accessible account of the myriad of meetings and documents, ups and downs as the story unfurled.

While the  place of the Extraordinary Form now seems quite secure in the life of the Church nothing can be taken for granted. In some places it has a high profile, with diocesan bishops celebrating Pontifical High Masses,  in others it is barely tolerated as something of an irrelevance and irritation. With the passing of the generation that lived through the upheavals of the 60`s and 70`s, I hope a more balanced approach will become the norm where the aspiration of Summorum Pontificum that the Extraordinary Form has a valued and respected place in the life of every diocese becomes a reality..

Leo has performed a great service by making this history readily available. The book comes with a foreword by bishop Athanasius Schneider. Available from direct from Gracewing at £25.

Here is Leo from a couple of weeks ago with a familiar face.