On Saturday we will be celebrating our patronal festival with a Solemn High Mass at 11am. Music by the Rudgate Singers. They are singing the ordinary to a setting by Grossi, a name unfamiliar to me but I imagine this may be him. Shared table afterwards in the Ingram Hall.
Posted by Fr Michael Brown at 09:14 No comments:

Good news a few days ago: Bede`s World has been rescued. Read about it here For more on the threat to nothern museums and how it`s easier to move everything to London see here.
Posted by Fr Michael Brown at 16:29 No comments:

Unfaithful Music and Disappearing Ink: Is there a lot of this going on? 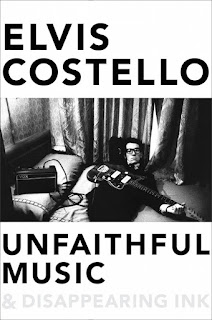 A few years ago I was somewhat taken aback when a friend told me that when she a schoolgirl they were taken regularly to confession and she couldn`t think of anything to confess so made up a list of sins and always added at the end `And I`ve told lies` to cover herself. Personally I`ve never had this problem. However I was watching Adrian Chiles recent programme, an exploration of Mediterranean religions, and was interested when he started with his atheist Croatian mother who had become an atheist as a child because she hated going to confession when she had nothing she could think of to confess. `Interesting`, I thought. Then this year I have started reading Elvis Costello`s new autobiography. From the time I set eyes on the LP cover of his first album. My Aim Is True, at a student party on South Street at St Andrews in 1979, I was intrigued at a figue that looked like a cross between Buddy Holly and Woody Allen, called himself Elvis and was steeped in the tradition of the genre and yet was something new.
Then I found the music captivating with its angry songs of guilt and revenge, mixed in with Catholic imagery but balanced by the sadness of the ballad `Alison`. There are about nine of his albums which I enjoy (which is far more than for any other singer).  So far in his autobiography he has mentioned his Catholic upbringing a number of times including the satisfying nugget that his father used to take him to a Latin Mass when it was generally being abandoned. He makes a reference to being an altar server (pouring wine over the priest`s fingers) but when it comes to confession as a child he says he couldn`t think of anything he had done wrong so looking at the commandments chose a couple to have something to say: committing adultery and added coveting his neighbour`s ox "to be on the safe side" (p.58).The priest he says `gently set me straight on the possible sins of a child and then gave me a penance of three Our Fathers and five Hail Marys for telling lies" He adds: " I`ve spoken with several Catholic friends who made the same idiotic, forced confession rather than claim their little souls were spotless"

All this makes me wonder whether this still goes on with first confessions? In my twenty-six years as a priest I`ve never heard any child make a confession like Costello`s and they all seeem to have been sincere but next time I`ll be more aware of this. Maybe Pius X`s move wasn`t that great if we ask for confession before first Holy Communion for children when it is the only time the Church requires confession for non-mortal sins before receiving Communion. I`ve no idea what the answer is.

I enjoy reading and was reminded recently by abbot Cuthbert that I promised to read his book on Mgr McReavy and Vatican II. I got my copy yesterday and have started and will report in due course!