Thanks to Acción Litúrgica I came across these pictures of Bishop Mark Davies recent visit to the headquarters of the Institute of Christ the King at Gricigliano, near Florence. I can`t say how encouraging I found these pictures and thank God for bishop Davies. I hope all is going well in New Brighton at the Institute`s shrine church. If only there were more bishops with the humility and imagination of Bishop Davies! 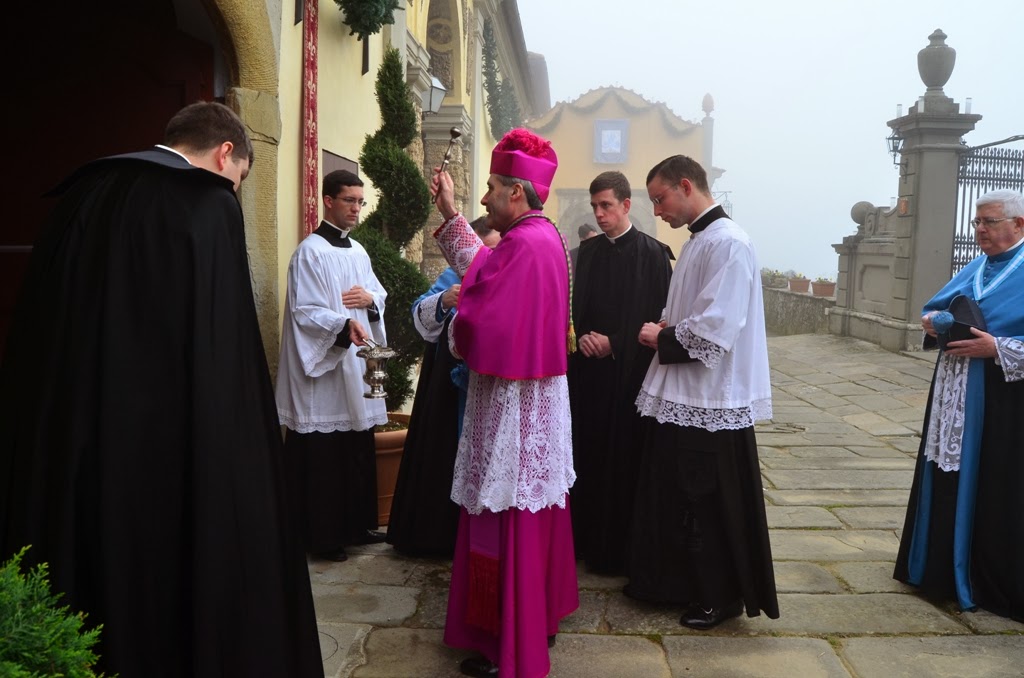 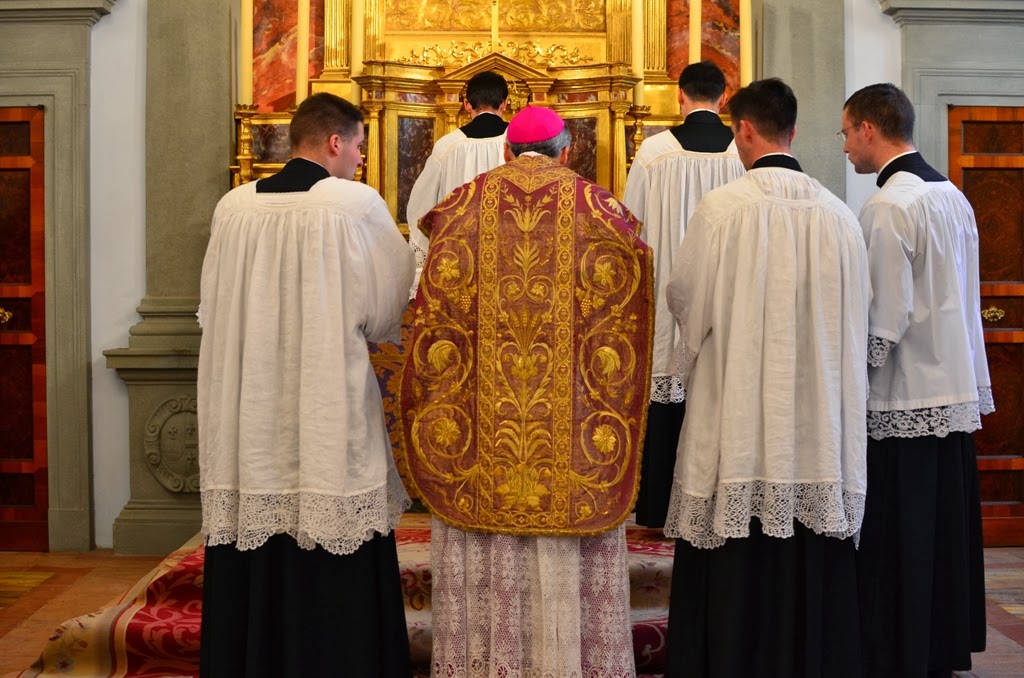 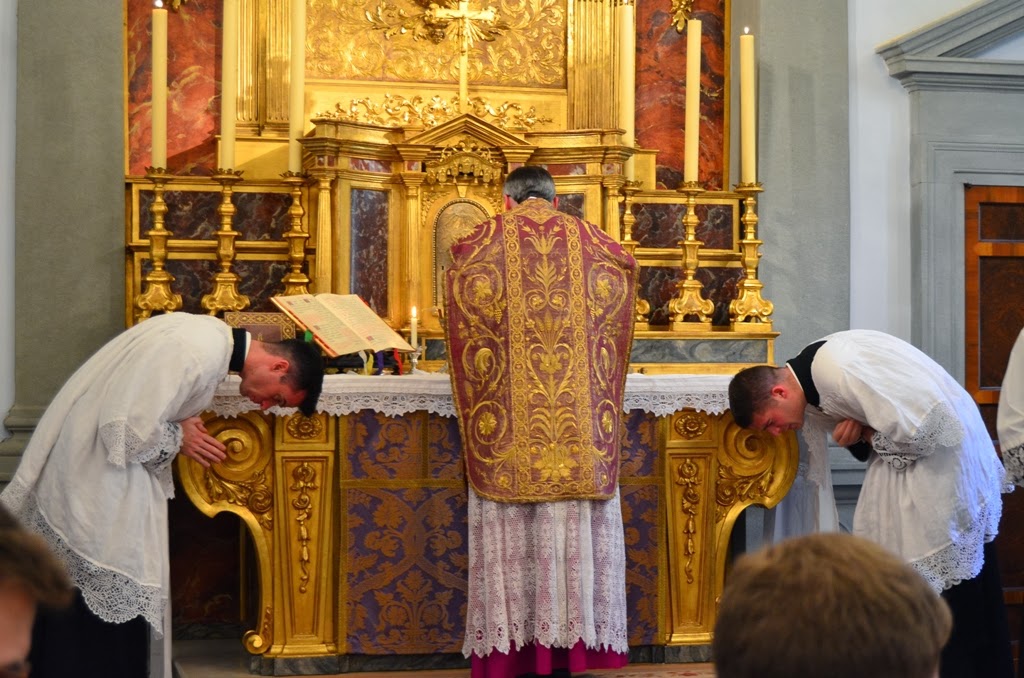 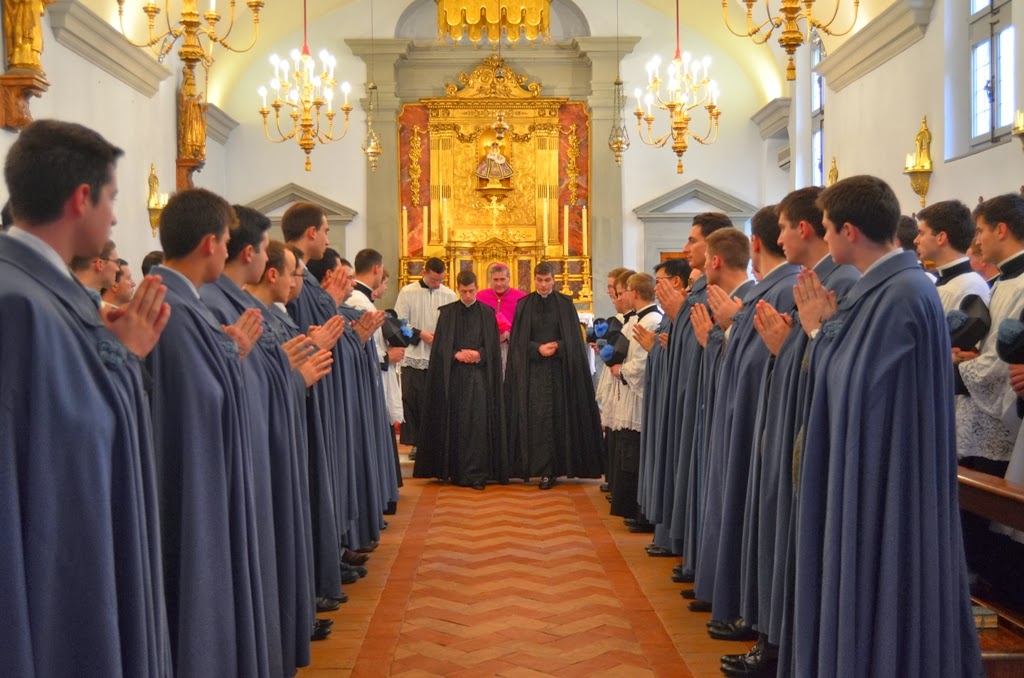 Even more awards and honours 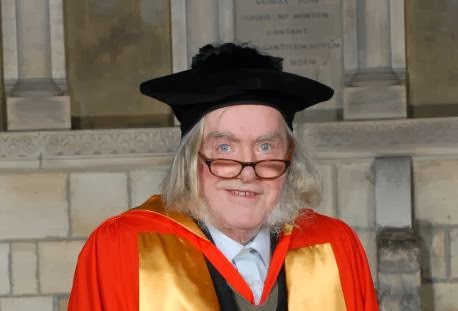 I was interested to read last week that Fr Michael Sharratt has been awarded an honorary doctorate by Durham University. Fr Sharatt has spent most of his priestly life at Ushaw and his award is for the work he has done in the library. Congratulations to Dr Sharratt.

I have reason to be grateful to Fr Sharratt as when I was a seminarian at Ushaw he used to have a room of surplus books fror sale. I acquired some very useful books in this way. I first got a copy of Fortescue from there as well as liturgical books such as a small Pontifical from 1937 a full Roman Ritual from 1895, O`Connell`s three volume Celebration of the Mass, a nicely bound set of Newman`s Lives of the English Saints and many more which have stood me in good stead.

When the Extraordinary Form Sunday Mass started in the 90`s in Gateshead it was at St Wilfrid`s. At Christmas it was decided to have midnight Mass there again rather than the normal venue of St Joseph`s because it was less likely to attract passing drunks-not being in the town centre-and  the heating is very efficient, unlike at St Joseph`s. In the event 65 people came and many said they enjoyed being back at St Wilfrid`s. It was a pleasure to be joined by local FSSP seminarian James Mawdsley. Many thanks to Pat for the photo. 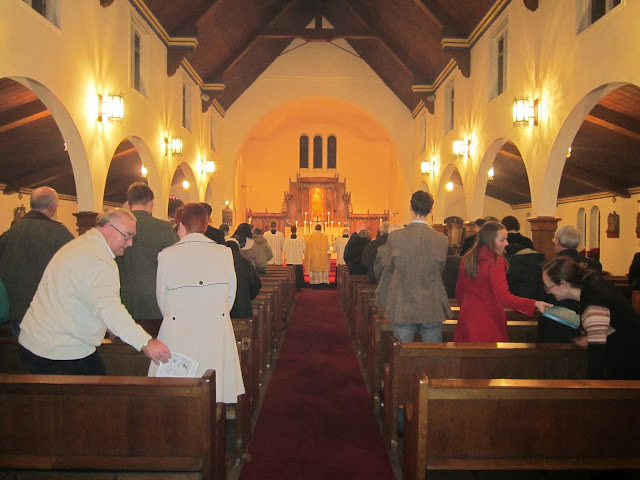 OK I may have misunderstood but I thought the situation was as follows. The conclave gathered after the unfortunate resignation of pope Benedict XVI. He was the greatest Supreme Pontiff since his namesake Benedict XIV but was overwhelmed by the corruption he saw in the Church and so decided to throw his hat in. The conclave are of the opinion that one of the Great Problems is the Roman Curia. It is full of self-obsessed Promethean Neo-Pelagians only concerned with how they can make further progress up the greasy pole and is a scandal. So step forward Cardinal Bergoglio who has what it takes to do the job and is elected on the understanding that he will reform the Curia.

So what happens? To overcome the great evil of clergy careerism it is decreed that the title of Monsignor will be abolished for all below the age of 65 to prevent clergy working to procure a handful of purple buttons. Hurrah, they say this man means business. But wait: this applies to the whole Catholic world except the Roman Curia where it will be business as usual and priests over the age of 35 who have completed five years service will automatically become Monsignors. Well that shows the Curia they`d better change their ways.

Looking forward to the next reforms!

UPDATE 13.01.14: I was surprised to see Rorate picked up on this!. My visitor statistics have gone through the roof.... Thanks New Catholic!
Posted by Fr Michael Brown at 14:57 9 comments:

Once again I am being showered with awards. A while ago I was given the Liebster award which I did nothing about. This time Mulier Fortis and Ben Trovato have given me a Sunshine Award. It pains me to have to say what should be obvious but following the example of Pope Francis and the long-standing policy of the diocese of Hexham and Newcastle, which was renewed by the Council of Priests last year, it is clear that I cannot accept any awards. For a long time now the policy of the diocese has been not to grant Bene Merentis, Pro Ecclesias, papal knighthoods, the title of Canon or Monsignor etc. There was one award which was given and that was the Northern Cross Spirituality Award but this seems to have fallen by the wayside too of late. A strange exception to the rule is the OBE or MBE or such like which it is OK to have. Congratulations to Elaine and Patrick.

Another problem is that part of the condition for receiving the award is that you have to nominate ten other blogs for the award and I can`t think of ten who have not been named already.

Another feature is that you are asked to reveal ten things about yourself. This I am happy to do.

1) I prefer carrots al dente
2) I quite like them cut into little batons but can rarely be bothered to do it.
3) I often wonder why the fashion of wearing different coloured trouser legs fell out of fashion at the start of the sixteenth century and has never been revived.
4) I think Brutal Youth is the best Elvis Costello album but seem to be alone in this.
5) I cannot fry onions for toffee.
6) I play the clarinet (I`m somewhat rusty but having lessons again).
7) I played the clarinet in the German College orchestra in Rome c.1991.
8) I once played the clarinet in the presence of the bishops of the Northern Province of England at the English College, Rome and was accompanied by the present rector on the piano.
9) I often seem to find a tape measure in my jacket pocket.
10) I can`t read my own writing.

So I hope that is ok. Without accepting an award I hope I have satisfied the curiosity of those who were kind enough to bestow it.