During photo shoot around Cathedral he also shook hands with mass-goers who were beginning to assemble at the Cathedral for 12.05pm mass and he simply surprised them by introducing himself as the new Bishop of the diocese. Many of them were surprised and got up in awe, some out of respect and one of them even kissed his ring when he approached and showed his warmth and simple demeanour.
When asked to comment on the first Papal visit to UAE he said: “we must always be ready to talk, there are things that divide us as Christians and non Christians. If we respect each other we gain so much out of it.”
On his leisure time involvements he said he loves theatre, opera and walking and added that given the vast coastline here in the north east that will be something to explore.
As the future shepherd of the flock of Hexham and Newcastle, he concluded that he would go about taking care of the priests as the priests take care of the people under their care. He said he is not averse to asking questions and added that he will not be shy to seek sage advice from Bishop Seamus as and when he needs it, during the course of his ministry as Bishop.
He has chosen to make his final move from Birmingham to Newcastle on St Cuthbert’s feast day- Hexham and Newcastle’s patron saint- on March 20 and will be installed as the 14th Bishop on the Feast of the Annunciation on March 25.

I`m delighted to hear that he is going to take care of the priests so they can care for the people. That`s how it meant to work I`ve always thought.
Posted by Fr Michael Brown at 18:23 1 comment: 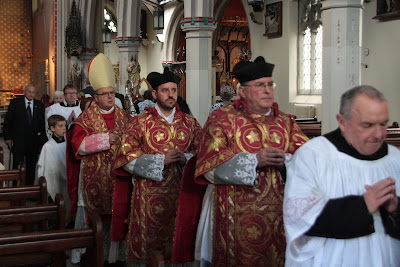 04/02/2019 11:00 am
The Holy See today announced that Pope Francis has appointed Bishop Robert Byrne as Bishop of the Diocese of Hexham and Newcastle.
Bishop Byrne succeeds The Right Reverend Séamus Cunningham, who has been Bishop of the Diocese since 2009. Bishop Byrne will be the fourteenth Bishop of Hexham and Newcastle.
Bishop Byrne was born in Manchester on 22 September 1956. He was ordained priest in 1985 and Auxiliary Bishop of the Archdiocese of Birmingham on 13 May, 2014.
Speaking of his appointment, Bishop Byrne said: “I am deeply humbled by the trust Pope Francis has placed in me with this appointment as Bishop of Hexham & Newcastle,
“I would like to thank the people and priests of the Archdiocese of Birmingham where I have served for the past five years and, in particular, Archbishop Bernard for his constant kindness and support.
“I look forward to making my home in the North East, with its rich Christian heritage, and also getting to know and serve the people, deacons, religious and priests of the Diocese. I ask all of you to keep me in your prayers as I pray for you.”
Bishop Cunningham said: “I am delighted to welcome Bishop Byrne as my successor at a time of great challenge and hope in this Diocese. The Lord Jesus is leading us along a road of rich discernment for the future of the Church and its mission. I know that the priests, deacons, religious and people of the Diocese will warmly welcome him and assure him of our prayers. May the Lord bless his ministry among us. We commend him to Mary the Mother of God, St Cuthbert and all the saints of our Diocese.”
The Most Reverend Bernard Longley, Archbishop of Birmingham, said: “I am delighted for the Church in Northumbria and Durham and for Bishop Robert that he has been appointed Bishop of Hexham & Newcastle. Bishop Robert has spent his entire priestly ministry in the Archdiocese as an Oratorian in Birmingham and Oxford and we shall miss him very much.
“Bishop Robert will carry his love and knowledge of Blessed John Henry Newman into his new ministry. Bishop Robert renews the bond of affection and faith between our two dioceses which the late Bishop Kevin Dunne had done so much to encourage. May St Chad and St Cuthbert inspire Bishop Robert as he prepares for his new ministry.”
Bishop Robert Byrne’s Episcopal Installation will be celebrated in St Mary’s Cathedral, Newcastle, on Monday 25 March. Full details will be confirmed closer to the date.
Posted by Fr Michael Brown at 11:01 4 comments: