Gabon: not as secular as Lindisfarne 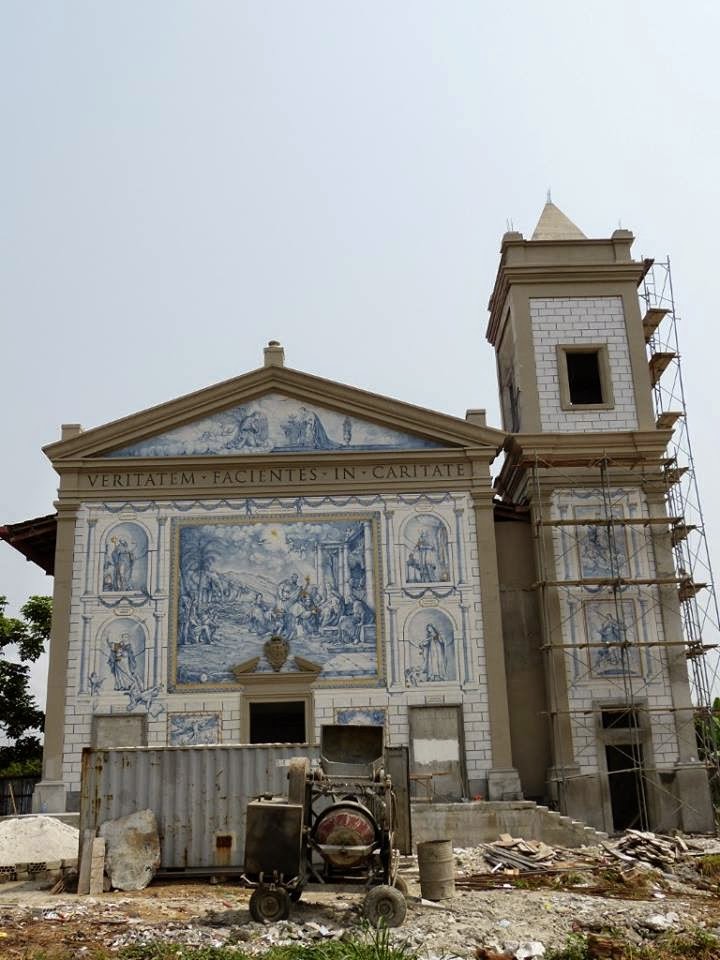 The Institute of Christ the King are busy building a church in Libreville, Gabon. I hope they`ve not had complaints about having too much of this kind of thing already. Quite a stunning facade. I think something like this would look rather good on Lindisfarne to house relics of Northumbrian saints. ((Fr Bede Rowe has ambitious plans.) This is what I would regard as moving Forward Together in Hope!
Posted by Fr Michael Brown at 08:55 1 comment:

I read in the local Evening Chronicle about trouble on Lindisfarne. I have no idea of the rights and wrongs of the issue other than what the paper says but it appears there is local opposition to a new church being built on the island. The ecumenical community of St Aidan and St Hilda want to build a chapel as their present arrangement has fallen foul of  health and safety rules. However some residents think three churches on the island are enough and are campaigning against permission being granted. What interested me was the quotation from the resident who said: `We are a secular community. There are people who go to church. We are not all agnostic or atheist but we are secular.”

How do you decide if you are in a secular place? Especially when that place is described as the `Cradle of Christianity` for the North East? After all Mr Cameron claimed we are a Christian country and surely the law of the land backs him up. As I say I have only a flimsy grasp of the issues but if you are an atheist living on Holy Island life could be somewhat uncomfortable.

Bishop Kevin Dunn to his credit, made it a priority to do something about the small Catholic chapel on Lindisfarne. It looks a bit more like a church now. It is surprising how little attention has been given to this major pilgrimage site. I suppose it is rather off the beaten track and fairly inaccessible given the tidal timetable. I`ve always thought if we were serious about our heritage the Catholics would by now have built a great baroque basilica to house relics of the Northumbrian saints such as St Cuthbert`s ring ( last heard of at Ushaw). Given the mood of the locals however perhaps now is not the time....
Posted by Fr Michael Brown at 09:48 4 comments: