So asked Juvenal in hs sixth satire; who will guard the guards, which has come to be used to ask to whom are those in power accountable? Well to God of course but also to their subjects. Although the pope canot be judged by any earthly court the sensus fidelium is always to be considered and bad papal laws can find themselves ignored by the faithful.` I`m still in shock over Traditionis Custodes. Silly really as it was clear as day that pope Francis loathes the traditional Catholic world. So why did he reach out to the SSPX, giving them faculties so their confessions and marriages would be valid? Who knows? After TC it surely wasn`t for any motive of giving traditional Mass groups an easier time that must be clear. Interesting that there is a major role in all this for archbishop Arthur Roche, the new head of the Congregation for Divine Worship. In his younger days he was private secretary to bishop William Gordon Wheeler, the bishop of Leeds (1966-1985) and, at the time the bishop in England most sympathetic to the cause to save the TLM. I remember Arthur coming to the English College in Rome in 1991 to get a licence ( ecclesiastical degree) so he could be advanced. Arthur`s rise to power has been remarkable but he has not always been known for pastoral sensitivity as when during his time as bishop of Leeds parishes were closed. In 2008 Roche's plans to close seven parishes produced vigorous protests, especially on the part of a parish in Allerton Bywater that offered a Latin Mass. I suspect we are in for a rough ride. The good news is our bishop, Robert Byrne, who is very sympathetic to the TLM. Masses will continue at St Joseph`s on Saturdays and Sundays. On holy days too I expect and for funerals and other sacraments. As the accompanying letter to TC makes clear that the pope`s aim is to only have one form of the Roman rite, the Paul VI version, we are then in a life and death battle. Much prayer will be needed. Our Lady Immaculate and St Cuthbert pray for us!
Posted by Fr Michael Brown at 10:50 10 comments:

So the motu proprio altering Summorum Pontificum came out today as predicted. It makes grim reading. Permission for the Latin Mass has to be sought from one`s bishop again. Fortunately we will have no problems in this diocese with bishop Robert Byrne. In fact he has already been in touch wih the celebrants of the EF in this diocese. The restriction on not allowing Mass in parish churces takes us back to Quattuor Abhinc Annos of 1984 which said the same but alllowed exceptions. Most diocees in this country only have parish churches. In this diocese it would mean Ushaw would be the only option.However as existing celebrations are to continue, as the bishop is to establish locations for the Mass but not to allow any new ones we have no option but parish churches. The restriction on new celebrants having to have authorisation from Rome seems bizarre. How will Rome know anything about the suitability of the priest? The appointment of a diocesan priest as moderator for the Mass could be a good thing to ensure all is done well and to help instruct the new celebrants. Clearly this is a move to restrictt the growth of the Extraordinary Form. As it is a growth area in the Church I don`t see it succeeding and all it will do is to tarnish the reputations of the pope and archbishop Roche as they try to obstruct the growth of the ancient Roman rite.
Posted by Fr Michael Brown at 14:59 8 comments:

Mass on the external solemnity of St Mary Magdalen

While we wait for the new document on Summorum Pontificum here is something truly extraordinary. Canon Edwards has a new Mass setting although as he says we might recognise the tunes.
Posted by Fr Michael Brown at 16:12 No comments:

Having been to the cathedral for Fr Wilkinson`s ordination I thought this iht be of interest from 100 years ago.
Posted by Fr Michael Brown at 16:13 1 comment:

All went well on Sunday for Fr Wilkinson`s first EF Mass at St Joseph`s. Here are some photos. I was impressed by Fr`s Latin and his getting the stress of words in the right place. His sermon, in which he addressed the topic of Catholic national leaders consenting to abortion went down well with many people. The choir were on good form and after half an hour sandwich break and more rehearsal were ready for Vespers and Benediction at 3. Fr Wilkinson is being assigned to St Mary`s, Hexham, as assistant priest, a parish also with an excellent choir. I was intrigued by Fr`s vestments, not having seen a cut like that before: they are from Mexico. Ad multos annos! 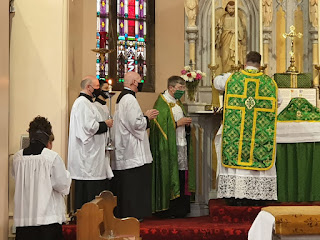 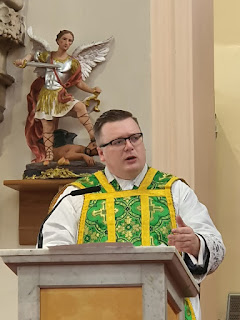 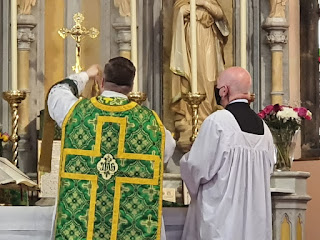 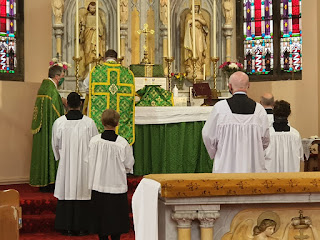 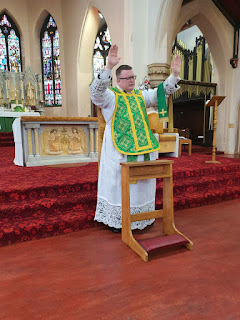