I am interested in history. I enjoy the North East Catholic History Society. I have been wondering about the history of St Joseph`s. The only history I had been able to find was the article in the book Down Your Aisle which gives  potted histories of many of our parishes in the diocese. My interest was stirred at the NECHS this last season when we had a talk on reactions in the North East to the restoration of the Catholic Hierarchy in 1850 when Fr Betham, the first pp of this parish got a significant mention as his announcement that he was to be parish priest of Gateshead got much criticism and I thought I`d like to know more.

Yesterday while searching through a large cupboard for bank statements i found a few undistinguished looking folders. I looked inside and was delighted to find items relating to parish history. I had looked in the file in the filing cupboard marked `photos` only to find it empty. Now I`ve found where they are. There`s a lot of fascinating stuff. Here`s a taster. This must be the original design for the church, with a spire which was never built. Such a shame it never happened. I would have liked a bell tower. 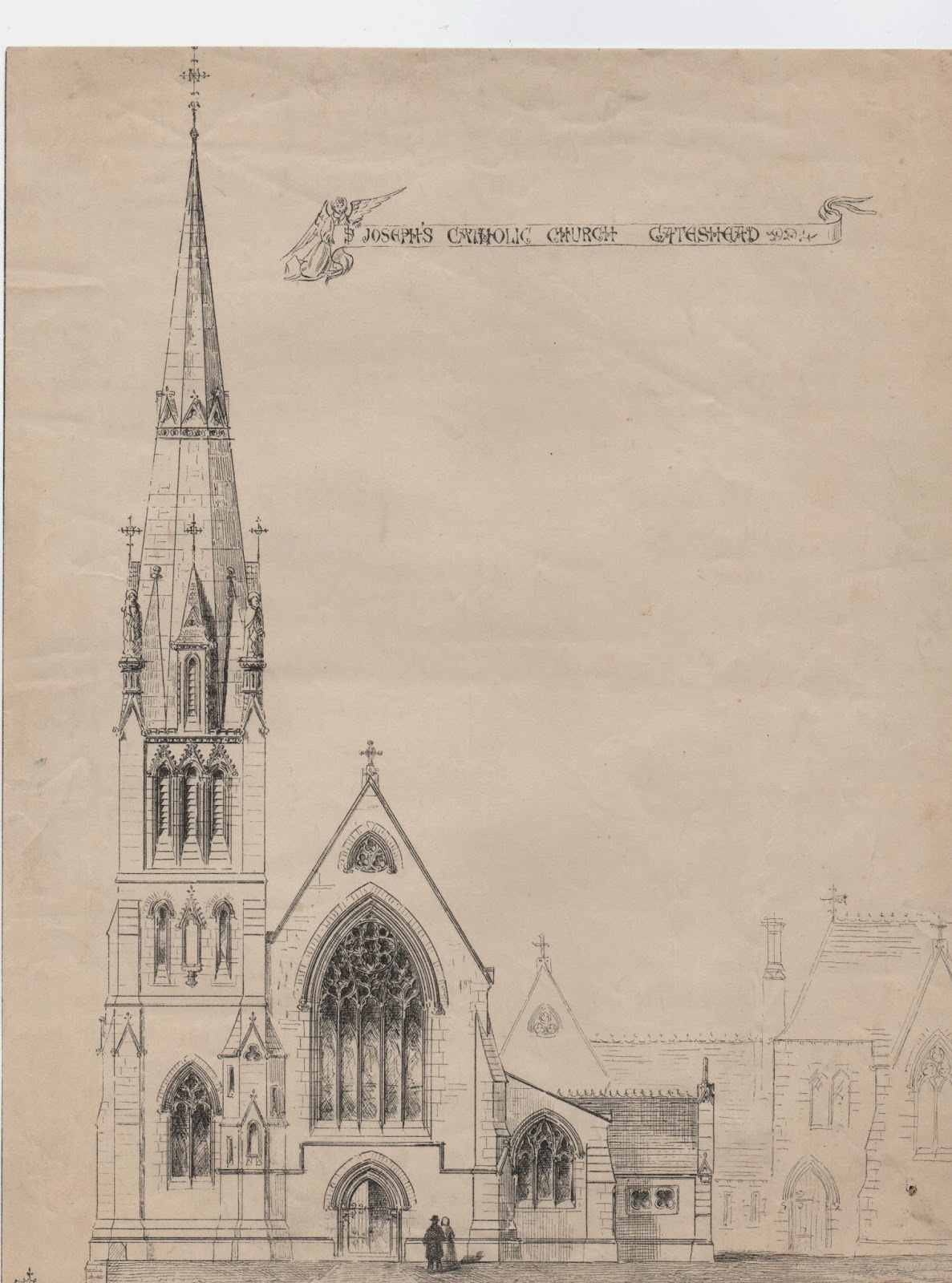 In a recent post about Philip Dillon`s letter to the Northern Cross I said it would be good to have a Juventutem group in the parish. Lo and behold I`d no sooner said it than plans were afoot and a group has emerged. My prayers are not usually answered so quickly! It would be very nice to have a baroque basilica to say Mass in.......

I`m very glad about the Juventutem group. So far we have four people interested but it is very early days and a programme needs to be sorted out. I hope it will flourish. Our diocese caters for Youth Ministry at the Youth Village. I`ve never been and may be one of those priests who were declared to be wrong about it when invited to make comments*. I`ve watched videos of the liturgies and all I can say is it`s not really me. As wide as the number of approaches to prayer the YMT provides I`m confident that the Extraordinary Form won`t be included.  I look forward to working with Juventutem and hope a number of our priests will be involved.

And yes for older people who feel left out I`m more than happy to have a Senectutem group for the over 65`s!

UPDATE 31.08.14 There is now a blog:  http://juventutemgateshead.blogspot.co.uk/


*From the YMT Review:

5.3 Some clergy raised the issue of the Catholicity of YMT and the mode of delivery of missions and retreats.  In this area there seems to have been a great deal of misconception over exactly what YMT delivers and the ways in which it is successful. Interestingly, many who were critical also admitted that they had not attended any YMT mission or events. The Review Team found that retreats and missions certainly did include a range of approaches to prayer and the sacraments, and presented the Catholic faith in a way that clearly engages young people.  This view was very much supported by schools and wider stakeholders, as well as the young people themselves.
Posted by Fr Michael Brown at 17:21 5 comments:

I have have been here just over a year now. One of the new initiatives has been Joe`s Place. This was at the suggestion of St Cuthert`s Care and provides a drop in cenre for the homeless in the parish hall once a month. Being in th centre of Gateshead I have almmost evry day someone at the door asking for help. It`s good to be able to direct them to this outreach. It is going very well and here is an account from Bernadette one of our volunteers.


Joe’s Place opened its doors at St. Joseph’s Parish Hall in Gateshead on Wednesday 7th May to provide a warm welcome and hot, freshly cooked food to anyone in need. We have 30 volunteers who work on a three weekly rota. All the volunteers have undergone Food Hygiene training and are DBS cleared to work with vulnerable adults.
Parishioners throughout Gateshead have generously supported this project by donating canned and dried food for our store cupboard. Each week we supplement these supplies by purchasing fresh food items like milk, bread, salad and fruit. We are currently looking at ways to raise funds, perhaps through cash grants, so that we can continue to supplement the ‘store cupboard basics’ with the necessary fresh food items.
The 5p bus is coming every month to enable our visitors to obtain clothing, shoes etc. We also endeavour to provide information about other services to meet the different needs of those coming to Joe’s Place.
Joe’s Place is proving to be a great success and there is obviously a real need for the work being done there. Approximately 90 meals are served every Wednesday, and at times 50 people have been seated in the hall. We anticipate that numbers may grow as winter approaches.
Our visitors receive a warm welcome, enjoy companionship and are served nutritious food. They are truly appreciative of all that is done for them. It has been humbling to see how many people of all ages are in need of a safe, welcoming place and a hot meal.
The generous support of parishioners is enabling us to reach out to help some of the many vulnerable, lonely and needy people in our area. Together we are all trying to live out Christ’s message of ‘loving our neighbour’.
We would like to extend our sincere thanks to the priests and parishioners for their support. We ask you all to keep this vital project in your prayers and to continue to help to provide practical support for those in need in our local area.
Posted by Fr Michael Brown at 13:35 No comments:

A letter to the Northern Cross

I was very pleased to see this letter from Philip Dillon in the most  recent edition of our diocesan newspaper, the Northern Cross. We could do with a branch of Juventutem in the North East.


I am a twenty-seven year old lay Catholic of the Parish of SS. Cuthbert and Joseph in North
Shields. Both my paternal and material grandfathers were Catholic but most of my family is
Protestant albeit in name only. I attended St. Joseph’s R.C Primary School as a child, and of my
own volition I converted to Catholicism because I wanted to make First Holy Communion with my
Catholic cousins. In 1995, I was baptised, made my first Confession, and received Holy
Communion. Sadly, I fell away from the practise of the Faith in my teenage years.
In 2007, through the grace of God, I went through a conversion experience. I began praying the
Rosary, reading the Catechism and watching the Eternal Word Television Network. At around this
time, I watched a video on YouTube of the Traditional Latin Mass narrated by Archbishop Fulton
Sheen. The solemnity and reverence of the Traditional Rite was deeply moving and I decided to
attend Mass for the first time in ten years.
The next Sunday, I attended the Extraordinary Form Mass at St. Dominic’s in Byker. The Usus
Antiquior was completely foreign to me, but I was awestruck by the beauty of the prayers, the
solemnity of the worship, and the devotion of the people. The quiet prayerfulness of the Liturgy
allowed me to fully participate in the Mass as I placed myself at the Foot of the Cross with Our
Blessed Mother and the Beloved Disciple. The prayers of the Mass enlightened my understanding
and inflamed my love for Our Lord in the Blessed Sacrament. I became conscious of the infinite
Majesty of God and I also became painfully aware of my own sinfulness. When the Mass ended, I
resolved to change my life and embrace the Faith I lost in my teenage years.
The Traditional Mass is the reason I began living the Sacramental life. I continue to attend this
Mass at St. Joseph’s in Gateshead. As a child I attended the Mass of Paul VI, but the Missal of
1962 brought me back into the Church. The Old Mass is solely responsible for my adult
conversion; in fact, I would never have lapsed if I had known that this Mass was available to me in my teenage years.
My experience is fairly common. The proliferation of Juventutem groups around the world and the
many vocations to traditional Congregations and Priestly Fraternities attests to the fact that a lot of
young Catholics are deeply attached to the riches contained in the Roman Missal promulgated by
Pope St. John XXIII. The Traditional Latin Liturgy also has a presence at World Youth Day. It is my
fervent belief that the Traditional Latin Liturgy is a vitally important part of the New Evangelisation,
and I am grateful for our bishop`s continued support of this Liturgy and am certain that it will quietly call many lapsed Catholics home. and bring about new conversions.!