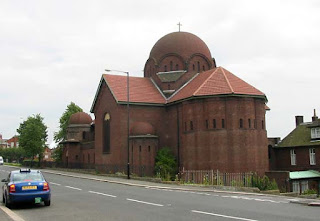 On Sunday evening I was delighted to entertain some old friends who used to work in Newcastle but now work in Berlin. They are Evangelicals and very involved in their local Lutheran church. On Sunday morning they had been for the Sunday service at St Joseph`s, Benwell, Newcastle. That may sound strange as Evangelical churches are not normally dedicated to St Joseph. You`ve probably guessed: St Joseph`s until recently was a Catholic church of the diocese of Hexham and Newcastle. In fact it still features on the Taking Stock website as a Catholic church. I`ve never been inside but had always thought it would be worth a visit one day but never made it. The design is unusual for a Catholic church in the North East with its large dome. On Sunday they were celebrating their first anniversary as an Evangelical place of worship. ( No mention of Lent on the service sheet.).

The last Catholic parish priest of St Joseph`s was Fr Jim O`Keefe. From what I heard the parishioners were told that their church needed urgent rewiring which would cost £40,000 and as they had no money it would have to close. It was sold to the Evangelicals for £1. Fr Jim has been leading our diocesan review Forward Together In Hope since then which has just concluded its three year review of the diocese, looking at how we manage decline.


The Evangelicals were from Jesmond Parish Church which has long been a flourishing community. Technically they are part of the C of E but the links seem rather complicated. Nonetheless JPC set about planting a church in Benwell at St Joseph`s. They had already done this in Gateshead in St Wilfrid`s parish where they built on the work of an independent church in the Old Fold to create Holy Trinity parish where they have built a new church. My guests told me how one hundred or so members of JPC were sent to get St Joseph`s off the ground. They worked hard and by what they called `sacrificial giving` raised over £1 million to restore the building. Through hard work and professional skill motivated by faith they have made St Joseph`s into a flourishing community with a congregation of nearly three hundred.

Meanwhile FTIH seeks to review the Catholic situation in the North East. The talk is of building flourishing communities and supporting smaller communities. I suggest we have something to learn from JPC. I have a small parish in a challenging area of Gateshead in St Wilfrid`s parish. There the small congregation have been following closely the developments of FTIH worrying that they may be earmarked for closure. No closures were announced at the big meetings to conclude the process held on 9th February but the threat is still there. Could we ever imagine a large, prosperous Catholic parish such as St Charles, Gosforth or the cathedral sending a hundred parishioners to St Wilfrid`s every Sunday to help revive the parish and start `sacrificial giving`? They would have to start a programme of evangelisation which means we would have to know and love the Catholic faith and have a zeal to pass it on to others. That would mean absorbing the Catechism of the Catholic Church and using the means that have been produced to teach it in an appealing way. It seems unlikely at the present despite the efforts of the diocesan evangelisation team. The reported remarks of the new Superior General of the Jesuits about how he hates to hear talk of doctrine summed up the problem. All we seem to hear about is decline and the goal seems to be to remove priests from their role as pastors and reinvent them as chaplains to lay-led communities. I don`t understand how that will create flourishing Catholic communities. As I heard said at the last deanery meeting we are moving the deckchairs on the Titanic as the band strikes up "All are welcome".

If the Catholic church was a business seeking to promote itself (wait a minute though, the diocese of Hexham and Newcastle is now a limited company: that sounds like a business!) surely we would play to our strengths. What has the Catholic Church got to offer that is unique and appealing? Things like an unbroken tradition of teaching from the age of the apostles, having been the religion of this land down to the Reformation, timeless beauty in its architecture, art, music and liturgy, the lives of its saints come to mind. For my point of view promoting the appeal of the Mass of the Ages as found in the Extraordinary Form should be a major part of this. It`s not going to go away and despite the lack of promotion or even mention of it in diocesan circles the Extraordinary Form continues to attract. The congregation here at Gateshead continues to impress by its steady growth and the number of young people who attend. Our Ordinary Form Mass on a Sunday has benefited from immigration too with parishioners from Roumania, Hungary, Israel, Mexico, Nigeria, the Philippines, China, India, Slovakia, Poland and Germany. St Wilfrid`s does have a flourishing Sunday community of nearly two hundred people in the weekly Polish Mass.  They don`t seem to have been involved in the FTIH process but they are young and keen. We could learn from their enthusiasm to preserve their Catholic culture too.

What JPC has done in Benwell surely has something we can learn from. I hope our Catholic communities will indeed flourish but they can only do so if they are well-formed in the faith as handed down from past generations.
Posted by Fr Michael Brown at 11:19