So yesterday we celebrated the feast of St Joseph with a splendid Solemn High Mass. Pictures to follow. That was what the diocesan ordo said was to happen. However the cathedral celebrated St Cuthbert and is celebrating St Joseph today. What of St Cuthbert for the rest of the diocese of Hexham and Newcastle? I might have thought being a patron of the diocese and a solemnity he might still have made an appearance somewhere.

Others have noticed this too. Rubricarius left a comment on the previous post and Ttony of The Muniment Room has drawn attention to this. In 1865 March 19th was a Sunday. This is what his English ordo for 1865 has to offer:

Rubricarius drew my attention to an interesting aspect of all this. St Cuthbert in H and N had his own octave! In Lent! I was surprised that St Joseph didn`t merit an octave but then again he wouldn`t mind... Rubricarius wrote to me saying: the praxis was conceded by specific grant of the Holy See to very limited number of dioceses but no further ones allowed from 1895. Did you realise you are living in a highly privileged diocese?

An octave of St Cuthbert in the middle of Lent would be exciting. Would this  mean a relaxation of Lenten discipline through those days? I wonder when it stopped? In fact I`m a fan of octaves at the best of times. Clearly the Pentecost Octave needs restoring as a priority but then we could have the others too. I wonder if there is an Ocatve Society pressing for their restoration?

Still it`s strange about the cathedral. Rubricarius thinks it must be in the hands of Rad Trads.

I went down to church to celebrate the 12.05 OF Mass to find confusion in the sacristy. John our weekday server, had said his office using the H & N setting on Universalis and found it said today was St Joseph`s day and yesterday was St Cuthbert`s. As he had just finished lighting the 29 candles we had set out in St Joseph`s chapel as well as the big six and the Mass was for an intention of his I gave him the benefit of the doubt. `If the cathedral can do it then so can I` I thought. Also we hadn`t had OF Mass at St Joseph`s yesterday as I celebrate on Monday at St Wilfrid`s.  At the start of Mass I explained the situation but found myself informed by Pat who was near the front that there had been a mistake in the ordo and that it should be St Joseph today. if this was true I thought we would have been emailed to inform us of the situation.  While I`m here a happy St Benedict`s` day today for those who are celebrating his feast today! 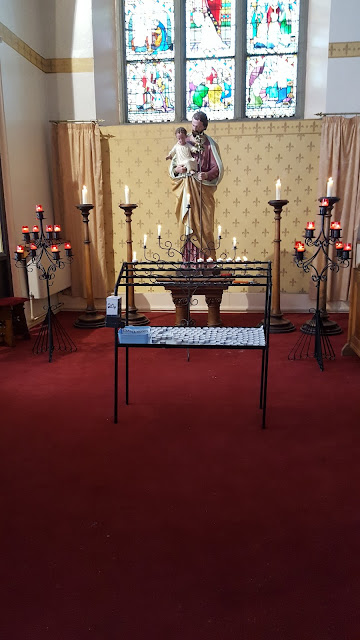