Last night I had the pleasure of being present at St Mary`s cathedral for the priestly ordination of Luke Wilkinson. I can`t remember the last time I went to an ordination. my hope was it would be something like this: 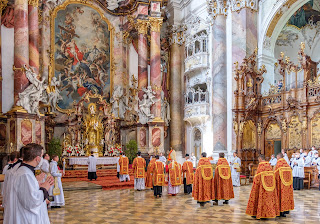 As it turned out that wasn`t too far off the mark. Priests not invited to concelebrate (and it was good to see we now have red concelebration vestments instead of relying on the white diocesan vestment at all times) were invited to attend in choir dress. Knowing that modern seminarians are rather keen on tradition I thought to myself "What should I take?` I suppose what I used to take to a Wigratzbad ordination in the 90`s" which meant choir dress and birreta as well as a stole for the laying on of hands. Approaching the cathedral there seemed to be a scene which reminded me of those Wigratzbad days as young clergy and seminarians stood around dressed immaculately in cassock and fascia. Mine was not the only birreta to be worn either. For the Mass setting we had the Missa de Angelis and Credo 3 plus some of the proper sung to the Liber. It was good to see Fr Luke having the manutergium ( a piece of cloth wrapped round his hands after they have been anointed and which is given to a priest`s mother and with which she is buried). Back in 1988 I smuggled a small piece of cloth in and let it soak some of the oil for the same purpose but it had to be done surreptitously in those days. In the event I couldn`t find it when my mother died in 2012. 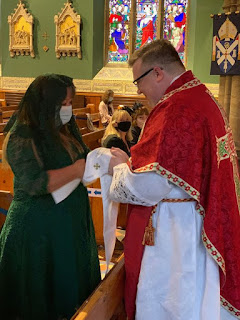 In his homily, the bishop asked us to have a positive outlook on others rather than looking to run them down (53 minutes). The Mass was held at the same time as the second half of the England-Germany match was played. I always seem to have soething else on when these significant games occur but if you listen carefully on the video at 1.40 you can hear the England suppporters cheering which told us that they had scored. Tonight Fr Luke celebrates his first Mass at St Anne`s, Winlaton at 6pm. I look forward to Sunday and his first EF Mass. How times have changed since I was ordained in 1988! I see Cardinal Parolin is being quoted as saying they really do want to crack down on Summorum Pontificum. I fear that there will be quite a lot of unhappy people, if this occurs, who will be looking to resist such a move. This from the pope yesterday sounds rather ominous too.
Posted by Fr Michael Brown at 09:40