I was interested to read that the teaching of Latin and classics is being proposed for state primaries by Professor Dennis Hayes, from the University of Derby. The article is here. Here is a flavour:

“As a minimum Latin and classics should be taught in every primary school and continued into secondary school with the addition of ancient Greek,” said Hayes, adding that the subjects could be offered by state schools through the Classics for All programme or the use of retired Latin teachers.


He (Prof Hayes) said he wants to “start a debate” about his proposals in his home county of Derbyshire. It follows critical comments he made at the Commons education committee’s purpose of education conference last week.
"If you go to Derbyshire schools, the kids are basically not learning anything.
“There’s these lovely kids in Shirebrook for instance. They’re great kids, but they’re not being taught anything. They would love Latin.”

Hayes said the teachers in his teacher training session would “hate” the idea of a move to teach classics in all schools, because they “think the only thing you need is Google. They confuse information with knowledge”.


I have some experience of this in that I helped with a Minimus course at St Mary`s. Forest Hall back in 2008. The children did respond well. The picture is of our main helper who made herself a Minimus costume. (Minimus is a Latin course for primary school children and is based on the life of a mouse (Minimus) on Hadrian`s Wall.) 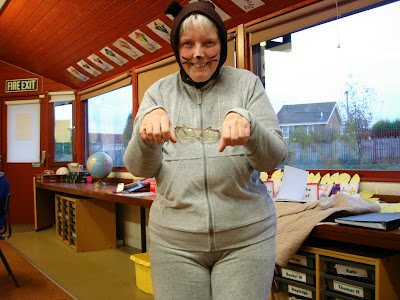 One of the benefits of studying classics is gaining an understanding of the world that Christianity entered and it helps us to appreciate the difference Christianity made to our Western world.Of course Gibbon said that the spread of Christianity had undermined the Roman spirit and led to the empire`s fall, despite the eastern empire lasting in continuity until 1453. More useful have been the recent comments of classical historian Tom Holland in the New Statesman. His article Why I was wrong about Christianity is well worth a read. It recounts his early aversion to Christianity and his gradual realisation that the values we take for granted as the hallmark of a civilised society are not as obvious to good people as we may think. He writes:

The longer I spent immersed in the study of classical antiquity, the more alien and unsettling I came to find it. The values of Leonidas, whose people had practised a peculiarly murderous form of eugenics, and trained their young to kill uppity Untermenschen by night, were nothing that I recognised as my own; nor were those of Caesar, who was reported to have killed a million Gauls and enslaved a million more. It was not just the extremes of callousness that I came to find shocking, but the lack of a sense that the poor or the weak might have any intrinsic value. As such, the founding conviction of the Enlightenment – that it owed nothing to the faith into which most of its greatest figures had been born – increasingly came to seem to me unsustainable.

Agnostics are generally reluctant to admit the debt that Western morality owes to Christianity. Why? Because it makes them dependent on something that they are not comfortable with, that they enjoy disdaining. Since childhood they have confidently assumed that religion is nonsense – it is awkward to admit that one form of this ‘nonsense’ underlies their most basic moral responses. Easier to pretend that universal humanism just comes naturally – evolves maybe? Holland is contributing to an important ‘back to basics’ mood: an urge to reflect on the roots of Western values – even if they’re embarrassingly religious.

I don`t suppose much will come of this but maybe one day!