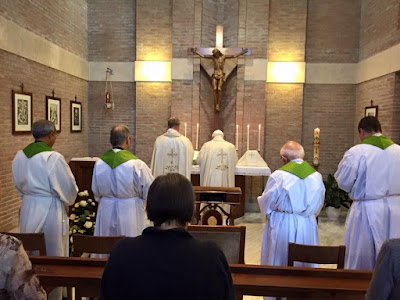 A picture of Benedict XVI celebrating Mass on Tuesday with the priests of St Anna`s in the Vatican. There appears to be a difference of opinion about the correct liturgical colour.  Good to see Pope Benedict celebrates ad orientem as he strongly advocated in his writings. But then this was always the norm at St John Paul`s private Masses. Pity he`d not done so a bit more when Pope. I tried one Sunday in Forest Hall but decided it wasn`t worth the flak. As for St Joseph`s we have the Extraordinary Form so those with a yearning for ad orientem can find it there without troubling others who, from past experience, can get very annoyed. And yes I did spend a couple of Sundays explaining the reasons for it. The arguments were somewhat undermined in that when celebrating facing the people at St Mary`s the priest faces east!
Posted by Fr Michael Brown at 18:07