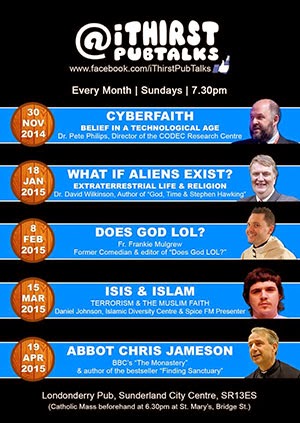 Given the bleak but exciting scenario in the pastoral letter something has to be done one would think. Here`s an initiative of two young priests of our diocese which may be interesting. Not sure about Muslims and the extra-terrestrials but apologetics are what we need: to explain why being a Catholic matters.

The press release as found on the diocesan website says:

Fathers Marc Lyden-Smith and Dan Fitzpatrick, who won BBC 1’s Pointless earlier in the year, are substituting the church for the pub to gather people for a different kind of spirit.
The clerical duo, who host their own online radio show called “The PodFr’s”, are starting a monthly event called “iThirst” in a Sunderland pub at 7.30pm on Sunday 30th November, so that people can have a pint and listen to popular guest speakers surrounded by the atmosphere of live music.
There are five iThirst faith-based pub talks scheduled to take place at the Londonderry pub in Sunderland between November 2014 and April 2015. The events are attracting well known public figures, including Abbot Christopher Jameson who appeared on the BBC reality shows “The Monastery” and “The Big Silence’, and physicist Dr. David Wilkinson who will talk on the possible implications that extraterrestrial life could have on our worlds religions.
The organisers Fathers Dan Fitzpatrick and Marc Lyden-Smith commented:
“We are excited to kick off the iThirst pub talks in a few days and have amazing guest speakers, who are experts in their chosen subjects. We have had a lot of interest, so we hope that everyone can fit in the pub!”