I was fortunate enough to be able to get away for a few days to Rome for the third annual Populus Summorum Pontifcum (PSP) pilgrimage. Not that getting away was easy. For the four days I was away I needed the help of five priests to cover my Masses. Getting one supply can be hard enough but finding five took a lot of time as many I asked were unavailable. Many thanks to all who helped.

Anyway, I got to Rome thanks to Jet2com on the last direct return flight of the season. Being able to fly direct is a great advantage: I probably wouldn`t have gone otherwise. The flight left at 7am so I had a full afternoon to fill. I`d thought about this and had decided to head the Palatine hill as I`d not been there for over twenty years. I took an ancient guidebook with me but sadly seemed to miss their designated approach and so found it all rather confusing. I had hoped to visit he house of Livia but when I got there found a notice saying tickets were available from the booth near the arch of Titus which was a long way to go back. Of the House of the Griffins I saw no trace. However the signposts on the site provided some information. I also had a favourite book with me, the Breviarium Urbis Romae Antiquae which gives extracts from Latin authors relating to ancient sites in the city. (I got mine from the Libreria Leoniana, near the Vatican for about 40 euros about ten years ago.) The views were good too. In the evening I had dinner with a fellow licentiate student from the Greg canon law aula, now an eminent canonist in the city, and enjoyed catching up and talking about current Church affairs.

The first appointment on Friday was due to be a meeting of clergy and seminarians of the PSP with cardinal Sarah of the Cor Unum commission. I had expected a larger gathering and thought I`d recognise a few people but it proved not to be the case. However I got talking to some of the Anglophones and went for lunch with them afterwards but of cardinal Sarah there was no sign. Apparently it had all got too complicated. In the evening there was to be Pontifical High Mass with cardinal Pell at the FSSP church, Santissima Trinita, but he didn`t turn up either. He did send his sermon read by the substitute celebrant, Fr Withoos, in which he said he really did have bronchitis and that really was the only reason he wasn`t there and he hoped to celebrate an Extraordinary Form Mass soon. The sermon was interesting and quite candid at times. It is here. When he said Francis is a most unusual Pope I wasn`t sure what was coming next but he said he was unusual in that he enjoys such widespread popularity. Mass was interesting too. The most recent Masses I`ve been to by the FSSP, last year in Rome and the ICKSP in Preston used the pre-1962 rubrics as regards the priest reading the epistle and Gospel at High Mass. Here we had strict 1962 except for the pre-communion Confiteor but then another surprise when Father sang the Misereatur and Indulgentiam. We also had the Ave Verum sung after the consecration. This Mass was packed to standing but I still only recognised a few people. I was going to introduce myself to Fr Zuhlsdorf but didn`t in the end. Juventutem had put on some food and drink afterwards which was very welcome. 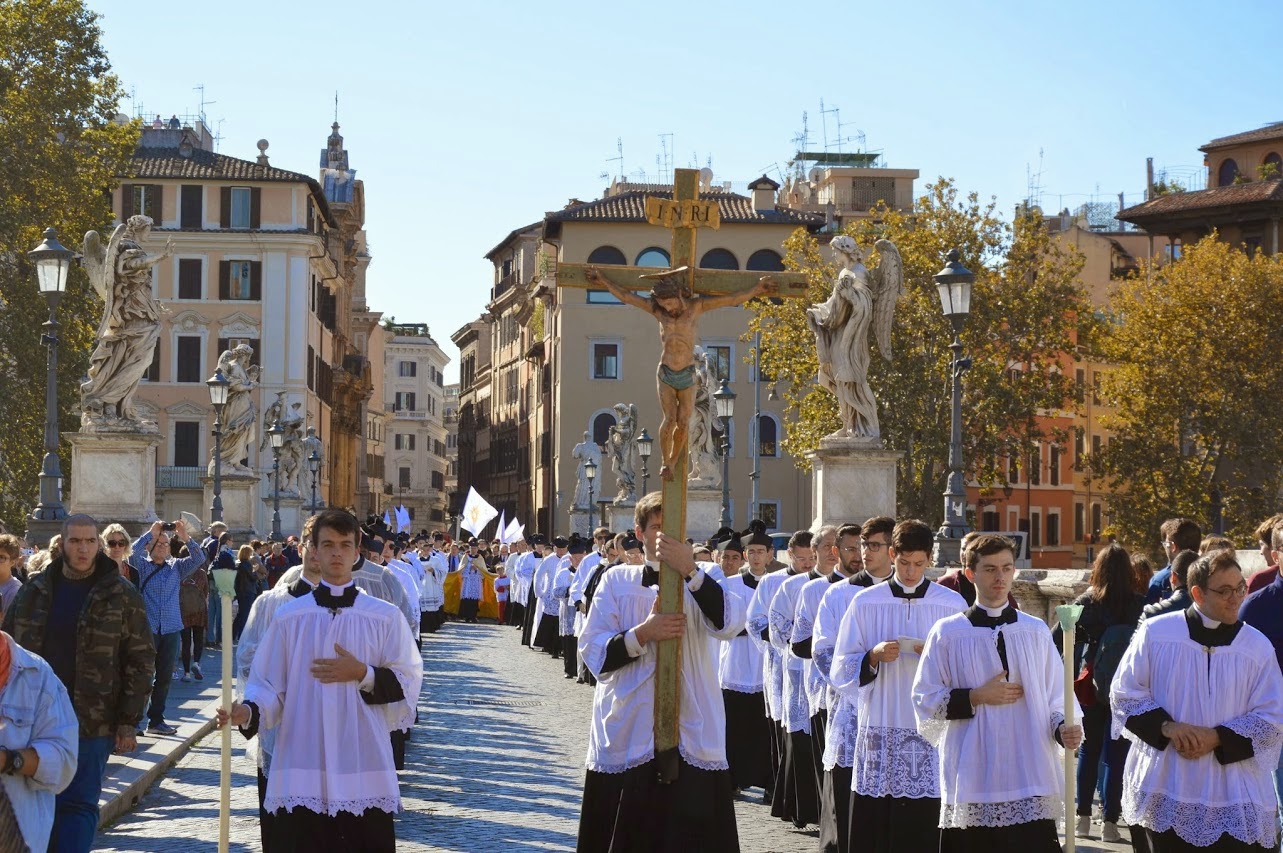 Saturday arrived and with two out of the three billed cardinals failing to appear I wondered whether cardinal Burke would turn up. The day started with Eucharistic Adoration at San Lorenzo in Damaso at 9.30. An easy bus ride from where I was staying near the Piazza della Republica. Or so I thought. The previous day I had been worried there may not have been buses because there was a general strike called but it seemed to make no difference to the bus service. On Saturday morning I`d heard a lot of noise from outside and went out to find the Piazza full of demonstrators. The press said there was a million. This did seriously interfere with the buses and it took a very long time for a 64 to arrive. I was beginning to think about getting a taxi by the time it got to 10 but a smartly-dressed young Italian man who latched on to me, as he was going to the same place but didn`t know where San Lorenzo was, assured me the bus would come. So I got there by about 10.15 in time for the start of the procession to St Peter`s. I was able to say a quick hello to Fr de Malleray before we set off.

The processsion and the Mass were wonderful. Cardinal Burke was there and we heard again the message from Pope Benedict to the pilgrimage and a letter from the Secretary of State on behalf of Pope Francis. Pictures courtesy of François Pierre-Louis 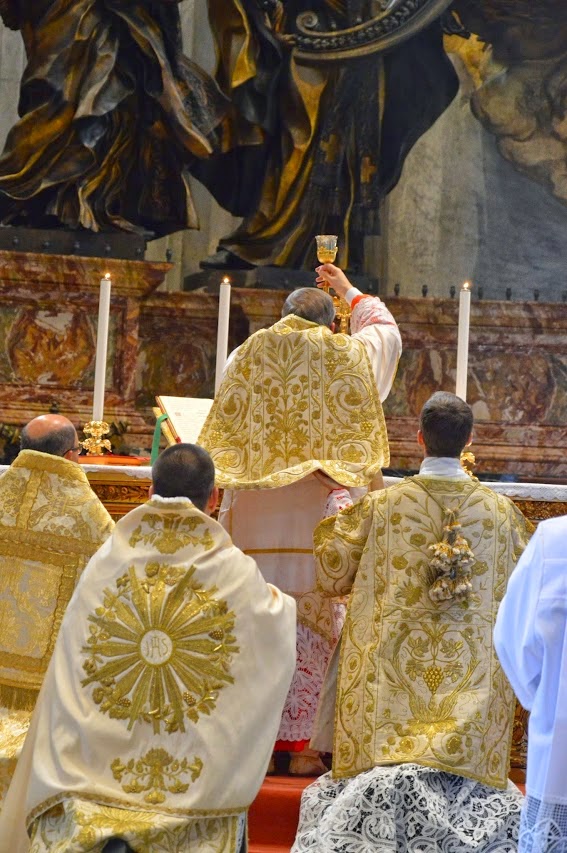 Interestingly we had more pre-1962 rubrics in that we had two sung collects when the second was only the commemoration of SS Chrsyanthus and Darius and I`m fairly sure the celebrant read the epistle and Gospel too.
However I was happy about all that. It was wonderful to see the choir stalls at the Altar of the Chair packed with seminarians and priests. Afterwards I left for lunch with an old friend: we used to play clarinet and piano duos when I was doing my licence in Rome twenty-four years ago.

After lunch I went to see the current exhibition in St Peter`s square on Pope Paul VI and the Artists. It almost made me feel nostalgic for Paul VI to see the papal enthusiasm for art in the exhibits: a strange new feeling!

On Sunday I concelebrated Mass at the English College. It was good to meet Peter, our Hexham student. After coffee and before lunch I nipped out to the happily very close Santissima Trinita where there was another pontifical Mass with a papal nuncio. I just managed to squeeze in at the back as the church was packed with a encouragingly young congregation. Leaving before the end I got back to the English College for lunch which was very enjoyable. I had a few hours to kill after that wandering around the centre of Rome before heading back to the airport.

I hope to be able to go again next year  and hope some of our Gateshead Juventutem group will be able to make it too.
Posted by Fr Michael Brown at 11:39