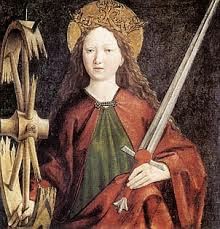 A few years ago we had the film Agora which dealt with the life and death of Hypatia, the female pagan philosopher of Alexandria, who refused to convert to Christianity. An interesting topic for a film I thought: I never thought to see St Cyril of Alexandria portrayed on the big screen! However the film was somewhat disappointing in its stereotyping. Christians were depicted as fanatics who wore black while pagans were virtuous and wore white. The chief Christian evangelist was a dodgy character. The exception was bishop Synesius of Cyrene, a former pupil of Hypatia, who was a good Christian. I was surprised the film didn`t latch on to the one quote I know of his, regarding his conversion, when he said in 410, he would become a bishop on condition that while he might `speak in  myths` in church, he should be free to `think as a philospher` in private. He also got the concession that he could keep his wife.

So it will be interesting to see what they make of Catherine of Alexandria, the Christian version of Hypatia in that she was also a philosopher. Facts about her are rather thin on the ground so anything could happen. Nonetheless it has drawn Peter O`Toole out of retirement at 82 to take a major part. Here is the trailer: