Well I`ve been back in Gateshead over a month now and I am still regularly asked how am I settling in. I reply `slowly`. However it is going well. I have a very heavy schedule of weekend Masses with a vigil Mass at St Wilfrid`s at 6pm on Saturday, then three Masses on a Sunday morning at St Joseph`s. the 9am is a quiet OF Mass with no singing. At 10.30 there is a sung English OF Mass. I`m pleased to say we have a small but enthusiastic group of singers and I like what they do. We are fortunate to have an organist too.The Mass starts with the entrance antiphon I am delighted to say, sung to a psalm tone after which there is the opening hymn. The ordinary of the Mass is sung, apart from the Kyrie, and with organ accompaniment.  The EF Mass follows at 12. Attendance has increased dramatically since the demise of he Sunday EF Mass at St Dominic`s, Newcastle and I would say it makes more sense to have one well-attended Mass rather than two small congregations on each bank of the Tyne. This is normally a Low Mass but I am very keen to increase the number of sung Sunday Masses as Low Mass feels somewhat less than one might hope for on a Sunday. I hope we will have a sung Mass every fortnight. We are trying to recruit singers as the schola is only two strong and we have no organist.

Once a month there is an African Mass at 2pm and I said that too last Sunday. I hope we will get a rota of priests from the diocese to help but 2pm on a Sunday afternoon is not a hugely popular time. The singing is accompanied by percussion, mainly drums. The music was lively and enthusiastically sung. I had wondred whether a solution might be to have the Missa Luba so we could combine the African and Latin Mass! It would make for an interesting article in Mass of Ages!

Each of these Masses is very different and it is hard to see how they could be amalgamated.

Apart from Sunday Mass, there is a weekday Mass at 12.05 from Tuesday to Friday and a 10am Mass at St Wilfrid`s a couple of times a week. The idea of 12.05 is to offer a Mass for workers. St Joseph`s is in Gateshead town centre and the civic centre is very near. I`m not sure many workers come to the Mass.  So all in all I`m kept busy, apart from being Judicial Vicar too. The parish hall is used by many groups and our hall bookings organiser is retiring his month and I`m hoping the transition to our next volunteers goes smoothly. I`m still chairman of the North East Catholic History Society which I enjoy and which is not onerous and de facto chaplain to the diocesan Association of the Eucharist which meets at St Joseph`s. And of course I`m also Northern Chaplain to the LMS although that is not a presssured role and teach a bit of Latin in the classics department ( as was) at Newcastle university.

Apart from this I`ve been trying to get sorted out in the presbytery. My cats have been settling in too. As I live in a first floor flat in the old presbytery they have quite a few stairs to descend to get outside but as yet I haven`t managed to get a cat flap installed so they`re not getting out much and show little interest in leaving the flat. I do take them out sometimes but Dizzy seems to have lost his enthusiasm for meeting people. At Forest Hall he was in the sacristy every morning to see who was there and who would stroke him. He also never missed a Tuesday coffee morning but here he seems content to lie on the sofa all day. I hope he`s not depressed. Here he is on a rare trip outside last week. 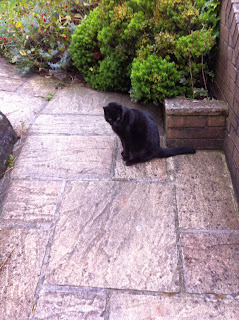 So there we are. Sorry this blog has been rather quiet but I`m kept very busy here. And as well as all this we have Pope Francis with whom there seems never to be a dull moment.
Posted by Fr Michael Brown at 17:53