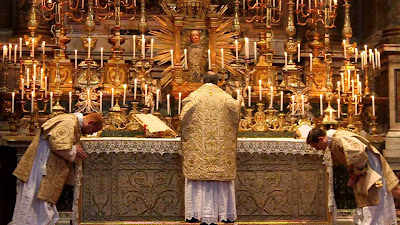 Here at St Joseph`s we have a keen young couple, Andrew and Jayne, who have been coming to the EF Mass for about six months now. Andrew has learnt to serve Low Mass and often has questions which I do my best to answer. One of the recent ones was why is there a double ablution at the EF Mass and only a single one at the OF? I didn`t have an answer to hand so consulted Jungmann. I was interested to read that the first ablution is to purify the mouth lest any fragments of the host remain in the mouth which may even be expelled. The second is for the fingers and the sacred vessels. However I was even more intrigued to read that there was a long neglected rubric in the Ritus Servandus which requires that when the faithful communicate they should then be offered wine mixed with water and a linen towel to purify the mouth. The reference given is Rit. serv.10.6 but I haven`t been able to track it down. I wondered whether the practice should be re-introduced as clearly this was the mind of the Church (although it didn`t make it to the 1962 rubrics). It would at least make less offensive that expression `taking the wine` often heard among Catholics which makes me wonder why we bother at all.

This set me thinking. There is a section of traditionalists who demand absolute adherence to the rubrics of 62. I must admit I`m not one. I bow my head to the cross for the Holy Name and expect there to be a Confiteor before Communion. I do go along with sitting down for the Epistle at a High Mass but after the Una Voce conference liturgies where at every High Mass the pre-62 arrangement was observed I`m begin to wonder about this too. And I`d like a few more collects etc but stick to 62 to avoid confusion. After all the 1962 missal was in force for only a few years before the next revised rubrics came along. I wonder whether the equivalent of the present 62 police were fuming for centuries because the faithful weren`t offered wine, water and a linen cloth after Communion.

Which brings me to another thing. The 62 rubrics do talk about the consecration candle for Low Mass. They say that where the custom exists it should be preserved. (It had previously been mandatory but largely ignored.) My good friend, Fr Briggs of Chislehurst, is a great devotee of the consecration candle and to such an extent he has introduced it into the OF as a praeter legem custom. I have yet to hear any calls from the 62 enthusiasts for its reinstatement, presumably because 62 does not make it mandatory. So I`ve decided to restore it. (To his credit a 62 enthusiast here greeted this with approval.)

I know we have to have order and discipline but I think there is room for local variations which are sanctioned by long-standing custom. Eventually a consensus will emerge. I`ve never been that keen on positive law for its own sake. Maybe I`m a terrible liberal!

I`ve just noticed Fr Z blogged about this a couple of weeks ago. I borrowed the picture from him. As for rules about the numer of candles at Mass I have no idea what is going on in the picture. it must be Mass coram Sanctissimo during the 40 Hours I presume although it`s not too clear.
Posted by Fr Michael Brown at 19:28